This issue of Bringing It comes to you as the country approaches a crucially important election. Control of both houses of Congress and state houses are in play and there are also intensely polarized struggles over state election boards and local school boards. Voting couldn’t be more important.

Building and sustaining democracy is at the heart of the education to which BT2P is committed; it’s a guiding value of the change work we support in the Paradigm Project. This issue features a campus that is doing great work supporting nonpartisan student political engagement—our home institution of Elon University. Since coming to Elon in 2020, we have admired the work of Elon Votes!, an initiative of the Kernodle Center for Civic Life and the Elon Department of Political Science and Policy Studies that has made voting and nonpartisan political participation a robust element of campus life. We reached out to Bob Frigo, Director of the Kernodle Center, and Professor Carrie Eaves to talk about it. (Their post below is drawn from a longer book chapter that will appear in the forthcoming Power to the Polls: Civic Learning, Election Engagement, and Political Action in Higher Education published by Stylus Publishing.)

Elon Votes! is only one exemplar in a growing infrastructure of associations and campus initiatives dedicated to strengthening student electoral engagement and nonpartisan political education. Key examples include the Institute For Democracy and Higher Education at Tufts University (which sponsors the National Study of Learning, Voting, and Engagement), the Campus Vote Project and the All In Campus Democracy Challenge. Their efforts—and the dozens of campus initiatives they amplify—have catalyzed a stunning boost in voting among college students (traditionally the least engaged segment of the electorate).

This movement for student political engagement goes beyond voter registration drives. As Bob and Carrie’s account of Elon Votes! underscores, it is also about fostering civic skill building, student leadership, and a publicly engaged campus culture. Such programs point the way forward.

In 2014, Elon’s Kernodle Center for Civic Life joined forces with the Department of Political Science and Policy Studies to launch Elon Votes!, a nonpartisan campus initiative to increase student participation in local, state, and national elections. The initiative is led by the Political Engagement Work Group, a collaborative team of students, faculty, and staff charged with encouraging student political participation on a broader scale. The group is co-chaired by a staff member from the Kernodle Center for Civic Life and the faculty fellow for civic engagement. 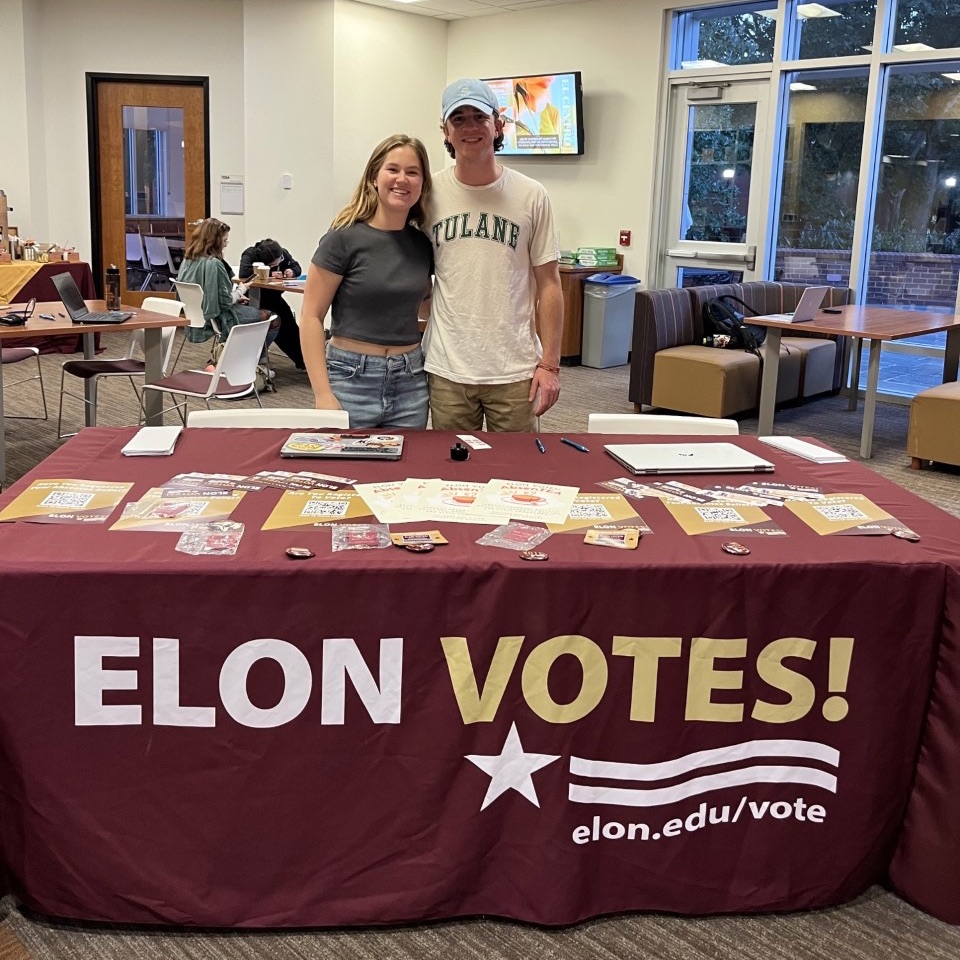 We encourage electoral participation through the Elon Votes! website, created in partnership with the local board of elections to serve as a campus clearinghouse for information on voter registration, absentee ballots, and voting in person. Because approximately 80% of Elon’s students are from out of state and have the option of either using their permanent address for mail-in ballots or voting in person using their campus address, the website has proven especially effective in helping students navigate a seemingly endless array of forms and instructions. It links to TurboVote, a site that provides voter registration and absentee ballot forms for all 50 states. The TurboVote site also allows students to verify that they are registered to vote, locate their local polling place, and access information on candidates. As a result of these efforts, voting rates among Elon students increased from 48.8% in the 2016 election to 74% in 2020; student voter registration increased from 78.8% to 89.9% over the same period. (Data courtesy of NSLVE, the National Study of Learning, Voting, and Engagement).

Alongside these efforts to support voter registration and turnout, Elon Votes! has created programs to give students a deeper understanding of how government works and participate more fully in our democracy. The Active Citizen Series emerged to deepen political engagement at the institution and to foster civil discourse across political differences. During the 2016-2017 academic year, for instance, programs included campus gatherings to view the presidential debates and Election Day results, along with the president’s inauguration and address to the joint session of Congress. Our programs took place on the ground floor of the campus student center, which has become established as Elon’s public space for political events.

As the Active Citizen Series has grown, programming generally falls into one of three categories: national political events, engagement with state and local government, and events to develop skills for civic engagement. National events include gatherings for Election Day, presidential debates, State of the Union addresses, and inaugurations. We purposefully provide minimal framing around these national events so that students can make up their own minds about what they have seen and heard. The goal is to create a comfortable environment for informal political discourse. Beyond the national spotlight, however, we work to introduce students to state and local politics through conversations with aldermen and alderwomen, county commissioners, and members of the state general assembly. These events humanize elected officials and encourage students to see themselves as change agents potentially in similar roles in the future. Finally, events to develop civic engagement skills include Deliberative Dialogues and workshops on how to navigate news sources and write letters to elected officials. These programs are designed to allow students to develop and hone the skills necessary to foster civil discourse across political differences.

The Active Citizen Series empowers student leaders as facilitators. Conversations with state and local government officials are moderated by students, with faculty and staff helping them prior to the event to craft questions. Student moderators work together in pairs and include a seasoned student leader along with an emerging leader. This peer mentoring approach allows for the continual cultivation of student leadership and models for student attendees how to conduct productive, nonpartisan political discussions with individuals representing a variety of viewpoints.

A deepening political polarization across the nation continues to make this work more and more challenging. Over the past few years, democratic engagement on some campuses has become more partisan. While this shift may be inconsequential for some campuses, it is inherently problematic for others—especially those at public institutions. At Elon University, we continue to evolve our civic engagement infrastructure, including the Active Citizen Series, to prepare all students to be actively engaged citizens in our democracy, regardless of their political affiliation.

Our friends at Drew University are seeking an open-rank tenure-track professor and Faculty Director of Civic Engagement. The Faculty Director would provide leadership and guide the vision of civic engagement at the university in collaboration with the Director of the Center for Civic Engagement. Responsibilities include the planning and implementing of curricular and academic elements, as well as Drew’s Action Scholars Program. The Faculty Director position also includes teaching, research, student advising, and mentoring and training faculty members in the field. Learn more

Thanks for staying in touch, contributing to our work, and for all that you do,